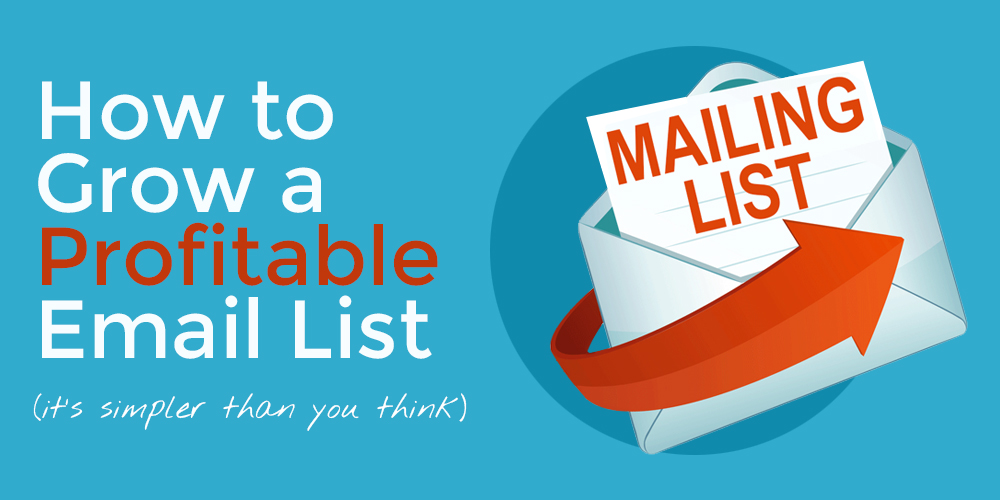 Email lists are one of the most, if not THE most, profitable form of internet marketing on the internet. You can buy lists, rent lists, or even steal lists but the truth is that no list performs like the one you grow organically on your own. And even though there are literally tons of providers out there that will sell you their list it’s technically a very grey area legally and we don’t recommend doing it.
Instead of trying to take a short cut it’s always better to get to the heart of what the method is really about and do it the right way so that you have a long-term solution for your business.

So why is having an email list so profitable? It’s a very cost-effective form of marketing. Emails are free and even if you’re using a paid service like mailchimp or aweber the cost of sending out thousands and thousands of emails is nothing in comparison to how much it would cost to buy that traffic from Google or even direct mail those people. A properly built email list is literally like a button you push to generate sales. When it’s built right it’s literally that easy.

The key to building a great email list is establishing trust with your audience. You want to become an authority figure to your potential customer base and someone they turn to when they want the unfiltered, no-fluff truth about your industry. This is literally the formula for any industry.

Take Stephanie Goodman. She writes a blog called “Good in a Room” where she gives advice about screenwriting to hopeful writers who want to break into the Hollywood system. Some of her posts talk about how to get an agent, how much writers actually make, and what executives want to hear from a writer when they finally do get a meeting.

You don’t need to know everything

Most of the information people are looking for is out there on the internet free for the taking but they don’t want to spend countless hours hunting down the good information. They’re looking for someone to do that for them and then spoon-feed them the useful bits while filtering out the nonsense. That’s where you come in.

The key to becoming an expert and establishing yourself as an authority figure in your niche is to do the research and report back to your audience with your findings. It doesn’t have to be over-complicated.

If you’re an attorney maybe your audience is interested in how they might file a divorce without an attorney and you can list the steps for them on your site. Don’t worry – even though it seems like you’re cutting yourself out of the picture the truth is the DIY people are always going to try to avoid hiring someone or negotiate your rate down to nothing.

The vast majority of people will simply look at you as someone who is offering everything for free because you have faith in the quality of your services and they’ll inevitable pick up the phone when they need your services.

The more you think about providing your client or customer base with incredible value the more they’ll trust you. In a later blog post we’ll go over the actual conversion tactics on how to get people to sign up like opt-in forms, sign-up bait, and exit pop-ups, but for now focus on how you can provide value to your audience and you’ll be two steps ahead of 90% of your competition.

← Previous: Wordpress Statistics (WP is Still King for 2017) [infographic] Next: The 3 Factors of SEO that REALLY Matter part 1 →