Why Most Web Designers Suck (Infographic) 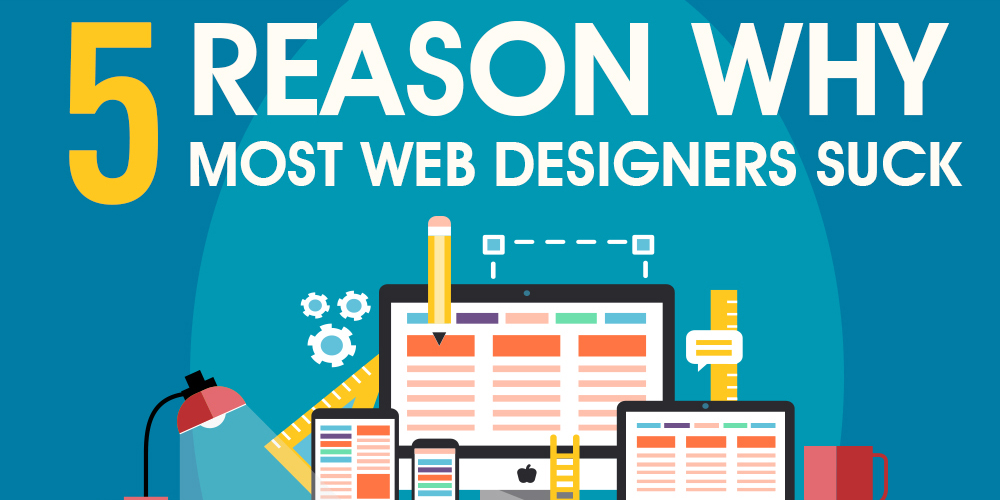 Why most web designers suck (Infographic)

I’m not the type of guy to typically get so controversial but after being in the web design business for over 10 years and having roughly 40-50% of my business fixing sites that other web designers and web agencies have screwed up for clients I feel safe in making the claim that most web designers suck.

Why though? Why are so many web designers soooooo bad and provide such a let down for their clients? There are many reasons why web designers (including some very big and expensive agencies) fall way short of the expectations that most people have when hiring someone to design a website and I thought I’d outline the most popular reasons I’ve seen in my own time below in the infographic. After the infographic is a more detailed explanation. Click here to jump straight to in-depth explanation.

Web design is a tricky business. It’s not as simple as learning to code. There are several moving parts to designing a website. In addition to the design of the site, there’s making sure that the website is coded in a way that will stand the test of time, load quickly and be robust enough to scale as the client grows. Additionally, when responsive web design became standard the demand for the level of education went way up.

New web designers have either decided to get into the business because they have a lot of ambition and figure “it can’t be that hard” or had one successful case where they built a friend or relative a site and took a leap to make it a new career. Either way, there’s a lot of pitfalls that web designers run into after working in the space for years that they just don’t see coming.

One perfect example is that getting copy for a website from your client isn’t always so easy. I can’t tell you how many times I’ve been sitting on a finished website and the last piece of the puzzle is the copy that the client is supposed to provide me with. There was even one instance where I waited a whole year before I got all the content from the client. New web designers have no clue how to handle these types of situations.

Usually, if a client takes more than a week to get content to you it’s a sign that they need help creating it and you have to take the initiative as the web designer to offer assistance in hiring an affordable copy-writer so they don’t end up delaying the project and growing frustrated with the process.

Let’s face it, nobody can make a living just making one or two websites a year unless they’re designing and maintaining big industrial sites for Fortune 500 companies. Generally speaking, websites range anywhere from $2,000 – $10,000 and in order to make a decent living on those prices as a solo-freelancer, you have to get several new clients a month. If you’re an agency with several employees, expensive office space and other expensive over-head you quickly start to realize that in order to make ends meet you have to start churning out websites like a well-oiled machine.

As a result, there’s a lot of web designers out there who try to get clients in and out the door as fast as possible and they take shortcuts on both the design and the development to speed up the process. Their big goal isn’t the success of their clients but ensuring that they get paid and can move on to the next client.

One very common way these firms and freelancers take shortcuts is by telling you that you’re getting a custom site but in reality, you’re just getting a template that they bought for $50 that they’ve spent an hour customizing to suit your needs better. We have another article about when a custom site is truly a custom site coming out soon that talks specifically on this topic.

One of the reasons we charge a bit more than the nickel and dime web designer down the street is because we don’t do that at Rhino Marketing Group. Each project for us is a true partnership and by turning away what we refer to as the low-hanging fruit clients who want a quick website for $1,000 – we get to focus on building true lead generation machines that get results for our clients. But making that kind of decision as a web design agency takes a lot of courage because it means that you might deal with slow months.

Some web designers and web design firms look at themselves as an a-la-carte service where you’re coming to them to fulfill one aspect of your marketing, namely web design. The truth, however, is that the vast majority of clients don’t look to web designers to simply build them a website.

Most clients view their web design provider as their go-to person for anything web marketing related. They don’t have a true grasp of how people find companies on the internet. They don’t understand things like Search Engine Optimization, Conversion rate, pay-per-click advertising or even the landscape of local directories available for people to use online today.

If your web designer hasn’t asked you what your overall goals are for the site and hasn’t suggested looking into Google Adwords, Yelp, Facebook marketing, etc. chances are they aren’t invested in making sure you have a full grasp of what to expect from your new website.

While it’s true that there are those clients who sometimes know the online market well and are just looking for a website to be built quickly, that is very very rarely the case and most people do, in fact, need not just a designer but a mentor in digital marketing – and most web design firms and freelancers just aren’t prepared to be that for their clients because they don’t want to invest the time or they don’t quite grasp the online marketplace themselves.

Reason #4 – They over-extend themselves

This is perhaps one of the least common reasons we’ve seen here at Rhino Marketing Group but it does come up from time to time.

Once in a blue moon we’ll hear of a client who was working with a web designer but since the start of their project, the designer/developer has blown up and acquired a bunch of new clients or a few key anchor accounts working for larger firms that have taken up a tremendous amount of their time.

When a designer gets overloaded with new clients or a few key big accounts they tend to let their smaller accounts fall by the wayside. Again this isn’t common but we have had a handful of clients who’ve been in this situation and it’s a real shame to see them essentially abandoned by someone they put their faith in.

Reason #5 – Their follow-up is utterly atrocious

This is by far the most common complaint we get about web designers and how we’ve always stood apart from the fly-by-night freelancers who spring up every two seconds in our space. I can’t even begin to tell you how many times a client has come to us because their web designer disappeared and is simply no longer answering their phone calls or emails.

If a client ever considered outsourcing their web design/development project overseas there is always the inevitable day when the project is 70% done and suddenly the web designer’s sister got hit by a bus in Calcutta or their mother has been recently hospitalized and they can no longer work on the project.

When we started out our web development company we flirted with the idea of outsourcing our work overseas and were fed these same lines and dealt with these same ridiculous delays that our poor clients come to us complaining about. It was only after about a month or two of this that we decided to take everything in house and not rely on foreign coders ever again.

I wish I could say that the problem does not exist in the states but, unfortunately, it does. There are people who have hired their own cousin or sibling who has come to us with a half-finished site where nothing seems to work but it kind of looks like what they were hoping for in a website. They’re hearts break when we look under the hood and find that the code is nothing but a jumbled mess and will inevitably break in a month’s time or get hacked and loaded with viruses because there’s no security in place.

Both web design and the SEO industry are filled with hacks. I hate raining down on my own industry but if I’m not going to supercritical than I feel like I’m doing a disservice to my clients. The old adage “you get what you pay for” generally holds true for web design except that even when you are paying an arm and a leg for a site there’s still a chance you’re being taken for a ride.

Generally when looking for a web design firm you want to make sure that the company is asking you about your entire business model, is giving you suggestions about how to best approach marketing, has a clear schedule in place for how the site will get done on time, and gives you a clear path on how the site will be maintained once it’s completed.

It’s also a good idea to check out a web designer’s Google and Yelp reviews…if they don’t have any ask why not. If you find a one-star review bring it up and ask what went wrong. They might have a good explanation but they also might stare at you and stutter and get all flustered and that should be enough of a sign for you to run for the hills and find someone with a stronger reputation.

← Previous: When a "Custom Website" isn't custom at all. Evil Web Design Firms. Next: Custom Website built quickly? Here are some tips to get it done right. →