When a “Custom Website” isn’t custom at all. Evil Web Design Firms. 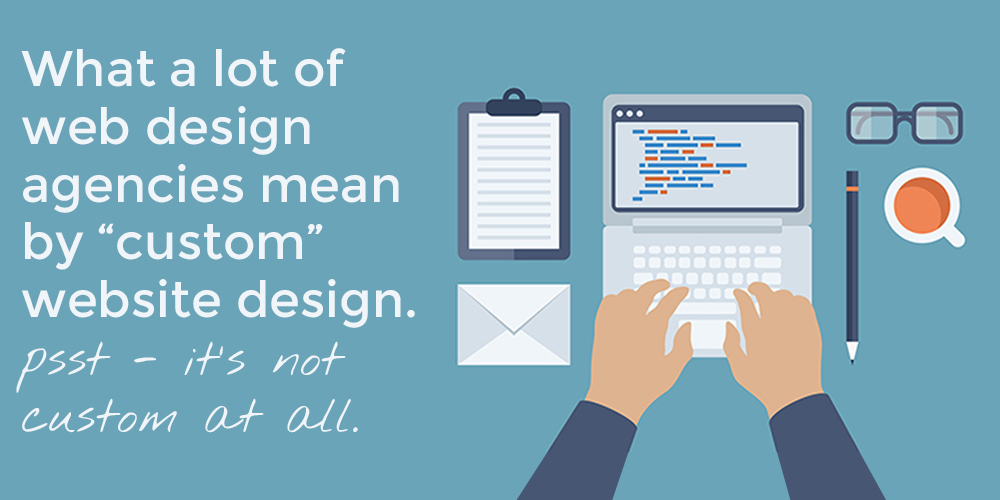 What a lot of web design agencies mean by “custom” website design.

There are a number of web design houses out there who do not build custom websites but still claim that they do. What exactly are they doing? They’re buying an off-the-shelf wordpress theme, changing a logo and adding some text and photos and passing it off as a piece of custom design.

The funny part is that the client almost never realizes that this is what they are doing until years down the line when they want to redesign one aspect of their site and suddenly they’re met with a lot of resistance from their web designer. Why so much resistance to make a small change on their site? Because the “web designer” they hired isn’t really a designer at all but managed to act as the middle man in selling them something at a huge margin?

They can’t be making that much money, right?

You might be thinking that the mark-up on buying something stock and adding a couple photos can’t be more than 10-20% right? This couldn’t be further from the truth. The most common marketplace that web designers will get their website themes from is without a doubt themeforest.net. I have yet to see a theme on themeforest that sells for $100. The most common price for a really well-built theme is around $50. These $50 themes are the themes that many web designers will sell to their clients for literally $3,000 – $5,000.

That’s not a typo.

You read that right. A simple $50 theme is usually bought and installed on a client’s server in a few minutes and then turned around for 10,000% profit. How is this done? It’s pretty simple, really.

Most people who want to build a website for the first time don’t really understand that over 25% of websites today are built on wordpress which is a completely free, open-source program. It doesn’t cost anything and I’m willing to bet that it never will. Additionally, there are thousands upon thousands of plugins that are also free that can extend the functionality of a wordpress site. There are a few great premium plugins but those usually cost less than a hundred dollars and are well worth the investment. All in all the software to build an enterprise-level site these days is basically free.

Most people don’t realize that. Most people also don’t realize that what styles your wordpress site is called a theme and that you can buy an off-the-shelf theme for $50 that looks incredible…and in walks the snake-oil website salesman ready to take advantage of that lack of knowledge.

How does this actually happen?

What typically happens is a web designer will take some screenshots of various themes and pass them off as original designs to their client and ask them to choose their favorite layout. Then, after they’ve made their selection, the web designer will purchase the theme for $50, add in the client’s logo, add some images, upload the website copy that the client provides and in no time at all the website is complete and they send in their over-priced invoice.

Now, to be totally fair, I’ve recommended themes to certain clients. I think if a client only has a budget of a few hundred dollars that a theme is totally appropriate. Pre-built themes have many many limitations of course. You can’t really modify them in any way you want without knowing how to seriously deal with custom html and php code, they tend to need frequent updates to keep up with wordpress security breaches, and in general they’re not totally modular so creating interesting landing pages or changing up your homepage becomes a bit difficult.

Usually the most difficult things to change on a custom theme website are the header and footer areas, and ironically those tend to be two of your most important areas in terms of converting website visitors into clients or customers.

My own personal experience with this issue

I was dealing with a client for about a year and a half and worked on designing them their perfect site. It had lots of custom functionality, a completely unique design that was built from scratch in photoshop exactly to their specifications, and really promoted their elegant brand. The site did quite well for them and eventually the company merged with another company and they had to rebrand.

To my shock they did not call me to build their new site as they had been introduced by their new company to a “high-end web agency” that was going to build them something spectacular. About two months later their new site was launched. It looked great, as most template sites do but I also happened to know that they paid over $7,000 for this new site and I was upset that this client got taken for a ride.

Did I do anything about it?

Of course I was pro-active in letting them know how they just got ripped off. I found the EXACT theme that the site was built on over at themeforest, which was on sale for $35 at the time, copied the url and sent it over to the president of the company in a nice email that explained how they just got had.

The president called me on the phone within five minutes livid. He started screaming about how what they did was illegal and how he was going to sue them and I had to calm him down and remind him how expensive and time-consuming it would be to take these guys to court and how, unfortunately, he would probably lose because they probably never outright claimed that the design was 100% original.

Needless to say, he never used that firm again and I continue to work with him on his email marketing campaigns, printed work, and SEO efforts. If he does ever merge with another company I’m sure I’ll be one of his first calls.